'Asterios Polyp' wins first L.A. Times Book Prize for Graphic Novels
April 25, 2010 |  5:15 pm
This is the 30th anniversary of the Los Angeles Times Book Prizes but this year's ceremony was the first to award a prize in the graphic novel category.

On Friday night, at the sparkling ceremony in downtown Los Angeles, I had the distinct honor of announcing the category's first winner: "Asterios Polyp" by David Mazzucchelli, a marvelous choice by the judges, who spoke highly of the quirky, brainy and cranky masterpiece:

"Mazzucchelli’s monolith is a beautifully executed love story, a smart and playful treatise on aesthetics, a perfectly unified work whose every formal element, down to the stitching on its spine, serves its themes. No wonder the main character is an architect finding his way back to his Ithaca and his Penelope: “Asterios Polyp” is an odyssey of design as well as writing and art and cartooning. Steeped in classicism and wholly modern, it’s a pleasure to read, and maybe even more of a pleasure to contemplate and discuss."

There was also a program note that will bring a smile to the faces of readers of this blog or, at the very least, I can assure you it had that effect on the writer of this blog: "With the Graphic Novel Prize, the Los Angeles Times Book Prizes becomes the first major book prize in the United States to honor publications in this category, which is an expanding part of the book landscape, both aesthetically and commercially."

The other finalists in the category were "Luba" by Gilbert Hernandez; "GoGo Monster" by Taiyo Matsumoto; "Scott Pilgrim, Vol. 5: Scott Pilgrim vs. the Universe" by Bryan Lee O'Malley; and "Footnotes in Gaza" by Joe Sacco. 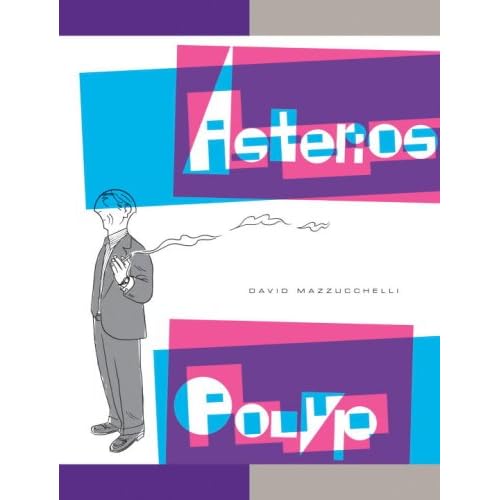